NCOSE, Allies, and DC Citizens Stand Up to the Pressure of “Full Decrim” Efforts

It is rare to come face-to-face with proponents of sexual exploitation, but we did on October 17 when the D.C. Council held a public hearing on a proposal to decriminalize the entire commercial sex industry—including acts of pimping, brothel keeping, and sex buying.

NCOSE mobilized to oppose the pending bill with an Orwellian title: The Community Safety and Health Amendment Act of 2019.

We created graphics to unify those in opposition to the bill under the banner of #ProtectSurvivorsNotBuyers.

NCOSE also made it possible for Melissa Holland, founder of Awaken Reno, to fly to DC to testify on the harms of prostitution in Nevada’s legal brothels, and for two 16-year-old victims of sex trafficking to travel from their Baltimore, MD group home to provide recorded testimony against the bill. 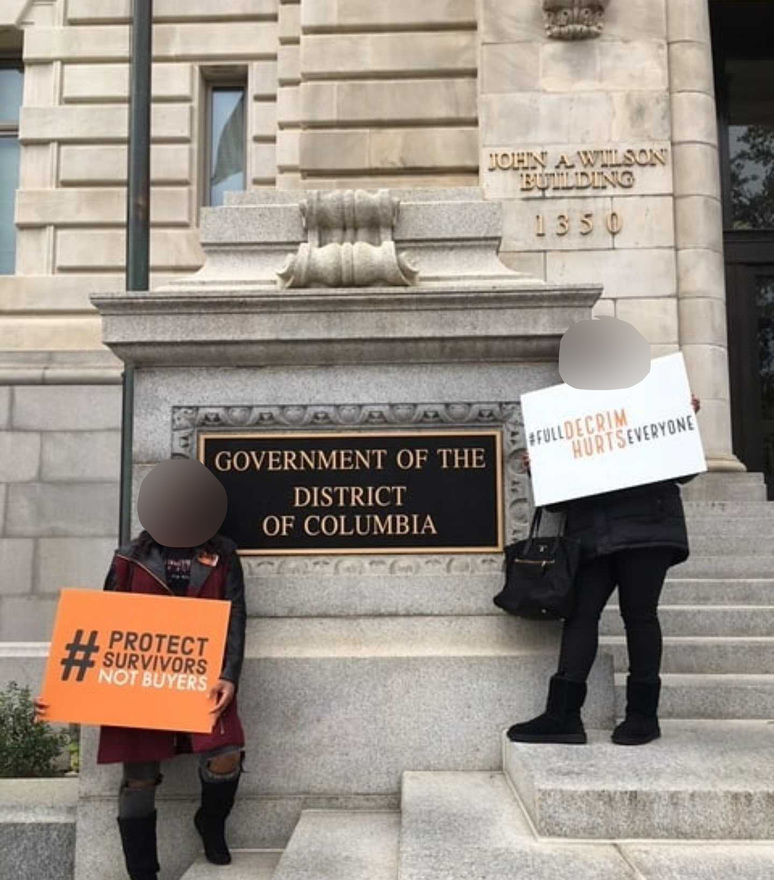 What were the arguments made by leading proponents? National organizations such as the ACLU and Human Rights Watch say they support the dangerous proposal as a way to make the sex trade safe, although not one study or non-partisan report supports this hypothesis. Local advocates also repeatedly mentioned that the police are the greatest danger, an unsupported claim.

Overall, proponents of the measure presented a fact-free defense of the radical proposal.

Heartbreakingly, high-profile local advocates testified that their sexual exploitation began when they were minors and some also spoke to the frequent involvement of drugs as a means for dulling the fear that accompanies routine abuse.

One of DC’s leading activists in favor of the bill told the New York Times that pimps are helpful managers, yet even she explained that her exploitation began as a minor at the age of 16.

DC is not the first jurisdiction to consider decriminalizing commercial sex. Over the last year, NCOSE has fought these efforts in Hawaii, New Hampshire, New York, and Rhode Island. We recently learned of efforts to promote it in California.

If you live in the District of Columbia or work at a DC-based organization, please add your name to a public letter of opposition that includes eye-opening facts about DC’s sex trade.

Learn more about this related project:

Need expert testimony on the dangers of sexual exploitation? Request NCSE for an interview or presentation, here.

Sign up to receive our newsletter. Be the first to know about the latest news, action alerts, and victories.